8. The Wabbit and the Agent's Vessel 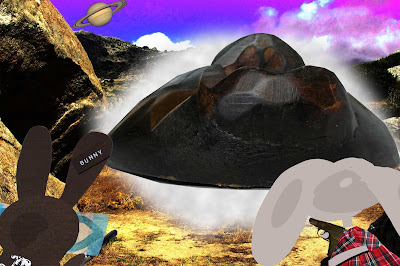 It wasn't hard to find the Agent's mother ship. The Wabbit and Lapinette followed their noses, mostly because the acrid fumes that belched from the craft were smelly indeed. The craft lurched from the ground. They pulled out their automatics. The spaceship coughed and wheezed and finally settled back down. They heard curses from inside. "I told you it needed a service!" yelled an Agent. "It was working this morning," came a reply. The Wabbit gestured to Lapinette. "I'm uncertain why we bothered. We could leave them to blow themselves up." Lapinette giggled and tucked her automatic back in her frock. "Cut out the middle rabbit?" Suddenly the vessel burst into life - and for a few seconds it flew in the air. But it just as quickly crashed down again. Smoke billowed from the hull. They heard shouting and a few curses. The Agents tried again. This time there was less smoke and the mother ship floated about two metres high. Lapinette's ears swivelled to hear any information. "OK," said an Agent, "fly it back to where the Wabbit and his gang hang out." But the vessel wouldn't go any higher. It lurched into the distance, circumnavigating rocks and trees and occasionally bumping on the ground. "I think we'll head them off at the pass," chortled the Wabbit.
at July 22, 2019