4. The Wabbit, Lapinette and the Vole 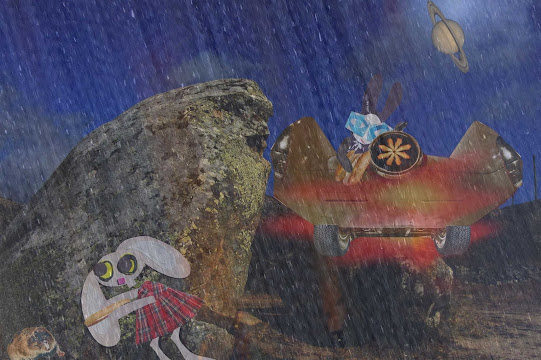 Turbina landed on the Planet of the Voles and they clambered out. Rain lashed their fur. "You might have chosen a better landing spot," grumbled the Wabbit. "Security, no tracks," she chortled. She pivoted on the rock and tried to dislodge the Wabbit. The Wabbit clung onto her engine compartment and quietly swore. "Oh look," said Lapinette. "Here's a vole." "There aren't any voles," said the Wabbit, "I made that up." There was a scurrying from under a rock. "I am a vole," grunted a small vole, "did you bring any food?" The Wabbit ducked back into Turbina's cabin for a salad sandwich. Lapinette smiled. "Did you see any wicked looking creatures?" The vole scurried back and forth. "Food first, information later." Lapinette passed a sandwich which the vole devoured in a single gulp. "I saw some hideous rabbits," he spluttered. "And?" inquired Lapinette. "More food!" snapped the vole. The Wabbit's face fell as he passed the last of his sandwiches. The vole snapped them up. "They're a few kilometres south and they have equipment of some kind."  The Wabbit dropped from Turbina with a heavy thump. "Equipment?" The vole shrugged. "I'm just a vole, not an engineer. But it looked like transmission gear." Lapinette reached out and stroked the vole. "Can you take us to them?"  The vole's teeth chattered." "Half of whatever you take from them." "A quarter," offered Lapinette. "A third," said the vole. "Done," said the Wabbit. He pulled out his automatic and turned to go. "But it's only because I like you."
[Vole graphic: Courtesy of Mikhail Kolesnikov and Marina Korobchenko.]
at July 12, 2019