3. The Wabbit and Lapinette Undercover 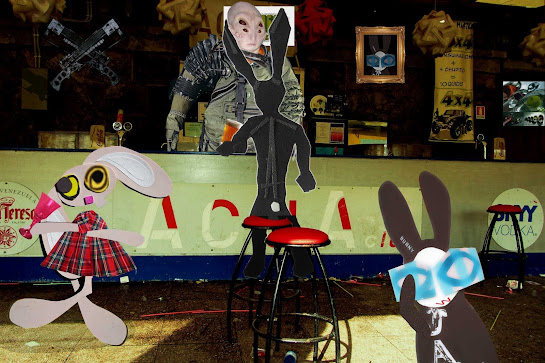 Planet OGLE-2005-BLG-390Lb was always freezing but the bar was one of the warmest in the galaxy. Leaving Turbina in a rocky rocket park, they stole inside and waited. The Agent on the bar stool got steadily drunker  - and the drunker he became, the more he talked. "We got them this time and I'll get a hefty bonus when we do." The Agent's voice was thick and slurred. Lapinette lurched against the bar and pretended to down cocktails. The Wabbit staggered up and down, reciting poetry and asking for money. Occasionally he burped. The bar belonged to their friend, the Alien Pilot. Information-gathering was his sideline, so all they had to do was listen as he pumped the Agent dry. "What a brilliant plan. Just brilliant." He offered the Agent another drink. "On the house for you and all you Agents on ... ?" The Agent grinned as he slumped against the bar. ".. the Planet of the Voles." The Alien Pilot pushed another glass in the Agent's direction." "Sounds terrific." The Agent smirked. "We have cutting edge reconnaissance equipment." "Squipment is exshpenshive," slurred the Wabbit. "Get that fart smellow another dwink," said Lapinette. The Agent laughed and drank and told the whole bar where the funds came from. He rocked on his bar stool and while he rambled on, Lapinette and the Wabbit crept away. Turbina set course. And when she took off for the Planet of the Voles, the roar of her turbines rattled every glass in every bar on the planet.  The Agent suddenly stiffened. "What's that?" "Mice?" shrugged the Pilot.
at July 10, 2019