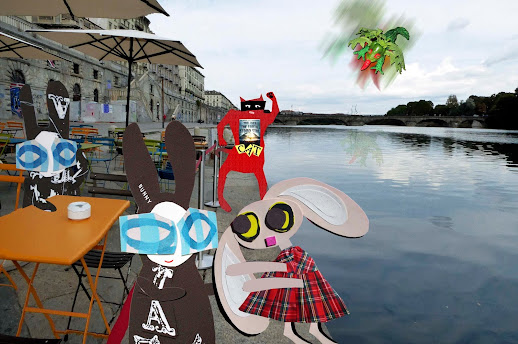 The team arrived at the Adventure Caffè. The afternoon was dull and heavy and hot, but there was no more swirling. They all said "Phew!" and relaxed. Lapinette hugged the Wabbit and the Wabbit hugged her back. "What was that for a kind of Adventure?" she asked. "Here comes Skratch to tell us," shrugged the Wabbit. The air got even hotter as Terni arrived. He blasted hot breath across the river and wiggled his wings. "That was a stellar adventure," he roared. "It certainly was," meaowed Skratch, "It was the ghostly epitome of post modernism." Lapinette grinned. "Skratch means that his analysis hasn't actually arrived." The Wabbit tutted and shook his head. "I think the whole question of troublesome alien invaders is a narrative paradigm consistent with paranoid delusion." Wabsworth chimed in. "Not if they are out to get us." Skratch meaowed for attention. "When I was on the saucer, the Ice Mice appeared incompetent. They indicated they didn't know what they were doing." Wabsworth nodded. "So the ripples we experienced were due to the ignorance of the Ice Mice."  Skratch wasn't happy. "It seems to me that their ignorance is a political act. It's a highly aggressive and deceitful manoeuvre, designed to trick opponents into compliance." The Wabbit laughed. "There's a lot of it about." Lapinette waved her paws. "Do you think we could trick anyone into bringing us drinks?"
at June 14, 2019