3. The Wabbit and the Rubber Road 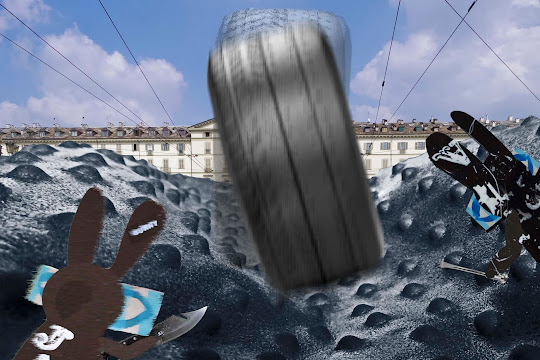 Wabsworth arrived at speed brandishing a tyre iron - and his timing was impeccable. The giant tyre rolled backwards and started to spin. The noise was unbearable. The ground shook under their feet and they felt it move, then sway. They began to lose balance and they slithered around. "It's a rubber road," yelled the Wabbit, "Run!" But they couldn't run. The dimpled surface of the rubber road made movement difficult - and every time they got to their feet, they fell and bounced back. But the tyre clung to the rubber road like glue, moving forward with menace, picking up speed. The Wabbit fished in his fur and pulled out Lapinette's edged weapon. He waved it menacingly and yelled, "I'll cut you a new tread!" The tyre swerved to the left but Wabsworth was in its path. "You're worn out! You need changing," he yelled. He lifted the tyre iron and stroked it. The tyre hesitated, then veered away, cutting a slick path through a highway of rubber. Wabsworth watched the tyre race out of sight, taking the rubber road with it. He wrinkled his nose. "He's unbalanced as they come." The Wabbit glanced down. The street was stabilising. It hardened and turned into asphalt under his feet. "No chance of it getting a flat, I suppose?" chortled Wabsworth. The Wabbit thought for a second and grinned. He groped for his radio. "I suppose it could be arranged."
at June 21, 2019