5. The Wabbit and the Flying Tyre 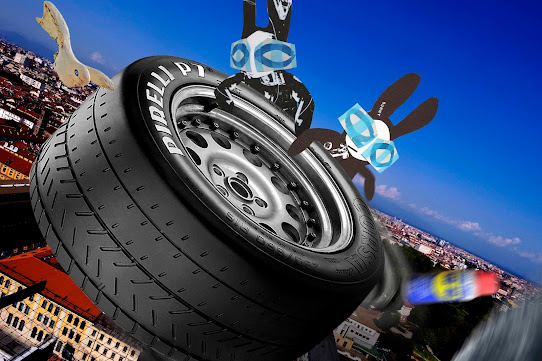 The Wabbit sprayed copious amounts of WD-40 on the rubber road, but it only half worked. The tyre parted company from the road but it flew high in the air, taking the Wabbit and Wabsworth with it. The Wabbit and Wabsworth clung on and grimaced. The Wabbit cursed as he lost a hold of his can of lubricant. It detached from his paw and made its way down to the city, but at that moment the tyre stopped spinning. It sailed lazily in circles, making whirring sounds. Wabsworth pointed and laughed as another sound caught his attention. A dove swooped around them making cawing noises and laughing. "Are you King Solomon today, Commander, or Prince Husain?" "It's Parakalo!" yelled the Wabbit. "Parakalo!" cooed the dove. "Give us a hand, Parakalo, we want to go down," shouted the Wabbit. Parakalo hovered near the tyre and cooed softly. The tyre made a whirring noise in reply. This went on for some time until the Wabbit interrupted with a wave of his paw. Parakalo wheeled straight up and then swooped down and hovered. "You can talk to him yourself, it's your tyre." The tyre wiggled, then spoke in a high pitched female voice. "My name is Prill. To where dost thou wish to travel, my master?" "Down would be nice," said the Wabbit. "Down where?" said Prill, "to the bazarre perhaps?" They were already skimming rooftops. "Just downtown," smiled Wabsworth.
at June 27, 2019