6. The Wabbit and the Laser Device 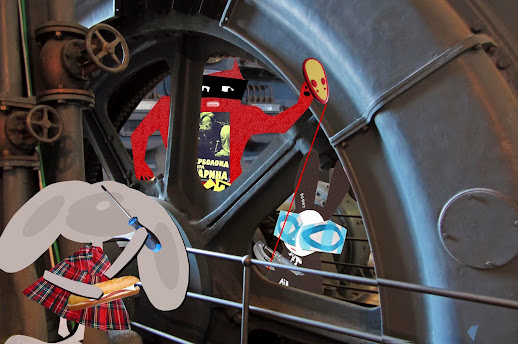 The Wabbit was tinkering in the engine room. He was responsible for Lattice Drive and although it looked antediluvian it usually worked - up until now. Lapinette appeared waving a sonic screwdriver, but still, they had no luck. The Wabbit produced an ancient micrometer from his fur and measured everything in sight. "It makes me feel better," he murmured to Lapinette. His stomach rumbled. "Perhaps you're hungry, Wabbit," suggested Lapinette, "Would you like a salad sandwich?" She delved into her frock and plucked out a sandwich. The Wabbit was extremely hungry but he persisted in measuring things. A delicious aroma of salad reached his nostrils and he was so busy savouring it, he failed to notice Skratch returning from the Ice Mice vessel. "Need a helping paw, Wabbit?" The Wabbit looked up. Skratch waved a device. "What's that Skratch, a toy?" Skratch meowed. "This is no toy." The device fired a beam that narrowly missed the Wabbit's ears. They heard a rumble and then a whine. Everything shimmered as Quantum carved a path through the space-time continuum. "Lattice Drive," they yelled. "Where did you get that thing?" asked the Wabbit. "I acquired it," purred Skratch. He grinned. "They'll never miss it." The Wabbit gave it some thought. "Does it do anything else?" Skratch purred long and hard. "Would you like me to heat up that sandwich?"
at June 10, 2019