2. The Wabbit and the Surprise Attack 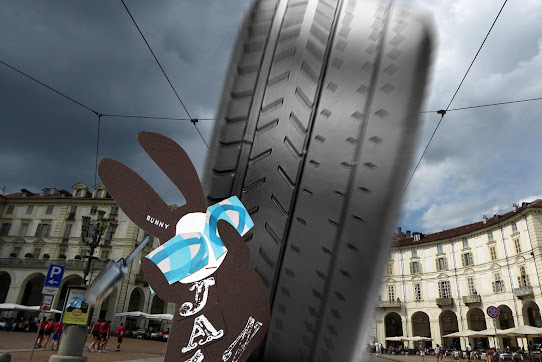 The Wabbit hadn't hopped far when things went belly up. He was happily hopping down to the river when he heard a whistling, which turned quickly to a rumble. He felt a wind, then a blow to the back. He rolled and cursed and got back up. The tyre was massive, as high as the tram wires - and it smelled of whatever tyres were made of these days. His nose twitched. Not rubber exactly. Rubber and something else. The Wabbit brushed soot from his fur and watched the tyre. It had rolled to a stop and it stood quivering in the road. It seemed to look at him. He picked up his radio from the asphalt and yelled. "Rogue tyre with attitude, Piazza Vittorio Veneto." The radio crackled. It was Wabsworth, his android double. "What kind of a tyre?" The Wabbit shook his head, but anyway, he looked the tyre up and down. "Pirelli P7, Corsa Classic. "Excellent tyre," murmured Wabsworth. The Wabbit said something rude under his breath, then, "Get down here, Wabsworth!" The radio whined. "Do we need any tools, Commander?" "This is not Formula One, Wabsworth. The tyre's alive!" screamed the Wabbit. Now the tyre was rolling towards him. The Wabbit edged back and under a portico. That was when it spoke. "I. Rubber!" The Wabbit nodded. He groped in his fur for his automatic and snarled out the corner of his mouth. "Don't you tyres get dizzy?"
at June 19, 2019