7. The Wabbit & the Wormhole Modulator 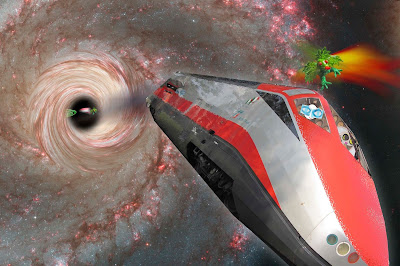 "Will it work?" asked Terni the Dragon. "Of course it will work," said the Wabbit. Terni laughed a dragon laugh and despite the Wabbit's various warnings, he slipped from the cargo bay and into deep space. Lapinette nudged the Wabbit. "They're coming." The Ice Mice saucer flew hard on their heels. "And they're none too pleased," smirked the Wabbit. He flicked a switch and a worm hole opened. Terni breathed a cone of flame and launched through. Quantum streaked after him. Lapinette watched the saucer. "Now," she breathed. The Wabbit flicked the switch the other way. The worm hole closed behind them. It was the Wabbit's turn to laugh. "That'll delay them more than Heathrow in the fog." Terni circled and returned on a fiery plume. "Excellent" he roared, "Now shall we all sing?" The speakers crackled. "You start," said Skratch the Cat from the engine room. Terni's voice boomed out. "Terni the Magic Dragon!" "Flies through Outer Space," trilled Lapinette. "He frolics through the galaxy, he's our dragon interface," ad libbed Wabsworth. Everyone laughed so loud that the sound carried through space. On the other side of the wormhole, the Ice Mice scowled and barged and complained about cats. Back on Quantum, the Wabbit set a course for Earth and cracked mice jokes. "I hope they have a mice day."
at June 12, 2019