5. Skratch and the Ailing Power Unit 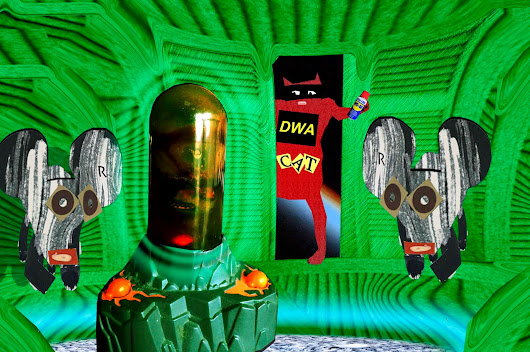 Skratch the Cat boarded the Ice Mice vessel easily. The door slid back with a pssst sound and he stepped on board. He could see what might be a power unit, but one thing was for sure. It wasn't working. Occasionally it bleeped and flashed but the bleep was tired and the illumination faint. "What can I do for you in your time of need?" meaowed Skratch. "It doesn't work," moaned an ice mouse. "What's wrong with it?" asked Skratch. "We don't know. No-one knows how to repair it," said another ice mouse. "Where's your engineer?" said Skratch. The ice mice wailed together. "We don't have one." Skratch sighed and complained about modern times. "Can you fix it?" asked an ice mouse. Skratch strode forward and kicked it viciously. The unit croaked loudly and a red light came on. "All is not lost," murmured Skratch. He took a can of WD40 and sprayed it in every crevice he could find. Then he kicked the unit again. It started to hum and the light began to pulse. "Aha," said Skratch. He located what looked like a switch, switched it off, then back on. A cooling fan chattered. Lights flickered in an ordered sequence. A robotic voice spoke. "System restored. Please enter your password." Skratch looked at the ice mice and they both shrugged. Skratch screeched long and hard. But he found the keyboard and typed "p a s s w o r d". The unit spoke again. "Booting full power. Have a nice day." The ice mice were delighted and they ran to hug Skratch, but he brought them up short. "That will be 180 QUID," he meaowed.
[QUID is a proposed space currency. The QuasiUniversal Intergalactic Denomination.]
at June 07, 2019