4. The Wabbit and the Strange Request 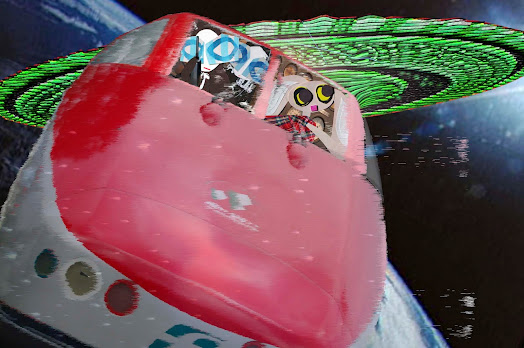 Quantum pulled away from the unknown forces and reached space - but only on push power. "Lattice Drive just won't engage," said Skratch the Cat from the engine room. They were stuck. Now Quantum's voice crackled across the speakers. "Behind you!" A green shadow fell across Quantum's bodywork. "It's the enemy. It's the Ice Mice!" yelled Lapinette. The Wabbit expected fire and he flinched. "Shields up!" he yelled. "I'm a train," said Quantum, "not a Klingon Bird of Prey." But it didn't matter, nothing happened. The ship just stayed there. "They're making me nervous," said the Wabbit. "OK, I'll open a channel," said Quantum. His voice boomed over the public address system. "Ridiculous green saucer, please identify yourself and state the nature of your business." Dead silence. "Try short wave," suggested Wabsworth. The Wabbit plunged a paw in his fur and pulled out a walkie talkie. He struck it three times for good luck and hissed, "We can see you, Saucer. Whadda ya hear, whadda ya say?" At first there was nothing except static. Then the radio whined. "This is the Ice Mice. We're stuck. Have you got a mechanic?" Lapinette burst out laughing. The radio whined again. "It's not funny." The Wabbit called the engine room. "Skratch, would you like a job?" They heard a long feline screech from Skratch. "I don't do rodent control."
[Short waves and other frequencies transmit through space. You can even talk to the space station.]
at June 05, 2019