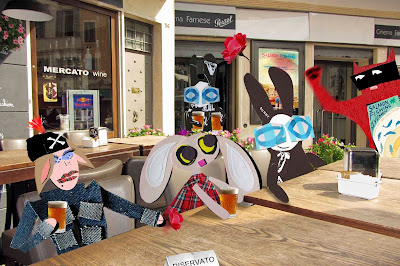 The day was boiling hot and everyone was thirsty. "There's a special beer on tap," said the Wabbit, "beer all round?" Everyone agreed. The Wabbit looked at Lapinette. "You don't like beer." "It's hot, I'll give it a whirl," smiled Lapinette. The Wabbit watched Wabsworth waft to and fro, ferrying foaming beers. Lapinette sniffed her drink, but her nose twitched and she convulsed in a sneeze. The Wabbit signalled to Wabsworth. "Large dry cold prosecco in a chilled glass!" Skratch the Cat loomed up and leaned in. "What was that for a sort of adventure you just had?" Wabsworth returned bearing prosecco. "In this case, art organised experience, to articulate the random as causal." "People like the illusion," shrugged Skratch. "Aye, it be thematically sutured," said Jenny. Lapinette nodded gravely. "You're right there Jenny. Another beer?" She sipped prosecco. Skratch purred. "Before we descend into the pit of relativism, I have something for Jenny." He delved in his fur and produced a red rose identical to the one she'd lost. He threw it high in the air. Jenny caught it and hid a grin. She pinned it on her hat. "What's the connotation of the icon?" "Passion?" offered Wabsworth. Skratch shook his head. "Resurrection and immortality." "You certainly know how to talk to a girl," said Jenny.
at July 20, 2018