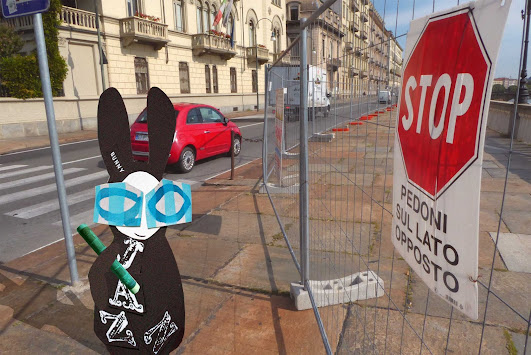 The Wabbit was in a dwam, just hopping along the footpath. Suddenly he came face to face with a giant warning sign. He stopped and studied it closely. The sign clearly advised walking on the opposite side but the Wabbit preferred the side he was on and said so loudly. No-one heard. He shouted a bit and poked the sign with his map. There was no response. "A rabbit can't go anywhere these days," he moaned. He opened his map and studied it. "Cartographers fill things with stuff," he complained. He turned it the other way. "That's better," he murmured, "now I can see where I have to go." The Wabbit was planning a trip and in order to plan a trip the Wabbit required a map, even it was a map of somewhere completely different. "I must have a map," he shouted into the air. The buildings echoed his statement but were otherwise silent. It was true that the Wabbit made good use of maps. He had once found his way out of a dense forest using only a railway map and a compass made from a needle and some string. The Wabbit thought the best parts of a maps were the edges. He ran a paw round all four and cast an eye up and down. But whatever the Wabbit as looking for, it wasn't on the map. That was a given. Things would be just too easy otherwise. He looked up at the sign, then whacked it with a paw. "No, I won't stop!" "Suit yourself," said the sign.
[dwam : Scottish. A state of being lost in thought.]
at July 23, 2018