11. The Wabbit and the Lepus Blockade 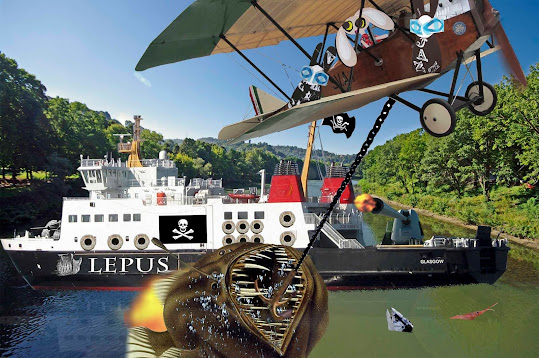 "The Lepus!" shouted the Wabbit. "How did it get here? "The cockpit radio crackled. "Captain Jenny to Susan, steady as she goes." Susan the biplane flew up then stalled. The Scunner Akwat hung in the air. The Lepus fired. Akwat shrieked as a low blast shook his fins. Susan shot up then back down. The Wabbit could only watch as he clung to the struts. Susan made three attempts to swung Akwat on the cargo deck and finally released the anchor. Sailors rushed on the deck and secured the giant fish with grappling hooks. "Hurrah!" gurgled the salmon as the big shrimp made a getaway. Susan flew in slow and they all jumped on the deck. Jenny was there to welcome them, but before she could speak, the Wabbit wanted to know the details. "They were your modifications, Commander," said Jenny, "The Lepus can yaw in and out of slipstream like a dog at a fair." "What shall we do with him?" wondered Lapinette. Wabsworth grinned. "Take him to the toxic lake at the back of the old munitions factory?" "I suggest Deep Ocean," smiled Jenny. She vanished to the bridge and suddenly the water churned and the ship shuddered. The Lepus and everything on it vanished leaving only a frightened shrimp with a giant salmon. Silence fell. There wasn't a breath of wind and the river surface was like a mirror. "What do you say we tell no-one?" suggested the salmon.
at July 18, 2018