4. The Wabbit and Jenny in Trouble 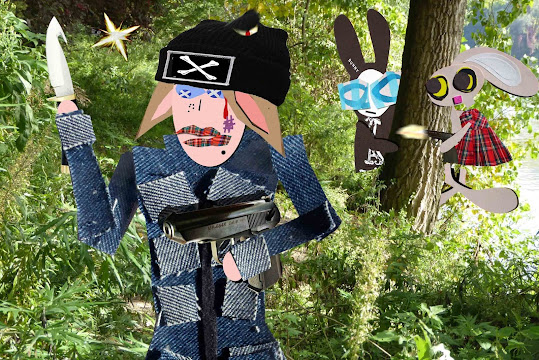 The Wabbit and Lapinette searched the River Po from the Dora to Ponte Isabella and beyond. Upstream, the trail became lush with vegetation. The sun appeared and made it sparkle. The Wabbit sniffed, then stopped because he'd lost the scent. They peered around but there was nothing to see. Crickets chirped. Humming birds hovered. Leaves lay flat and breathless. Suddenly Jenny came crashing from a tree with a thud loud enough to startle the squirrels. The Wabbit and Lapinette stood stock still and watched. Jenny looked the worse for wear. Her hat was improvised and her uniform unkempt. The weapons looked functional, but they didn't belong to Jenny. Something was far amiss. The Wabbit heard a scurrying in the undergrowth and looked round, but Lapinette heard it first. She raised her automatic and pointed. The Wabbit saw the sun glint from a gun barrel aimed directly at Jenny, and the only thing he could do was yell, "Hit the Deck, Jenny!" Jenny dropped quickly from sight just as two shots rang out. A blast from the woods tore a fragment from her hat and made a groove in her fur. A second from Lapinette sent the assailant's gun spinning. There was a groan. Something crashed off through the undergrowth - followed by a hail of bullets as Jenny and Lapinette fired round after round. "I hate the countryside," sighed the Wabbit, "it's far too noisy."
at July 02, 2018