4. The Wabbit and the Fatal Island 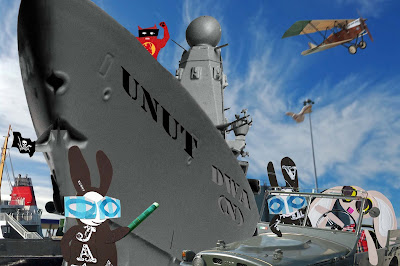 When Lapinette arrived at the docks, things were more than ready. "We leave on the next tide," said the Wabbit waving his map. "Aye, Commander!" yelled Skratch the Cat. Lapinette wanted to know where they were going. "What's on the map?" asked Wabsworth. He tapped the jeep's hood three times. "Oh nothing of interest," said the Wabbit. "I just like to wave it." He tucked it back in his fur and paused for effect. "From the information in the Codex, I gather it's somewhere between Naples and Tunis." Parakalo the dove circled overhead and cooed. "Parakalo is our lookout." said the Wabbit, "He will fly ahead and bring back twigs." "So we'll know when we're close," murmured Lapinette. "Then what?" asked Wabsworth. "We land and look for the holy artifact," shrugged the Wabbit. Skratch wanted to know if there was anyone on the island. "A miserable old man and his daughter," replied the Wabbit, "and a sprite - and someone referred to as a son of a witch." Skratch meaowed down. "What's the name of this island." The Wabbit looked up. "The codex says it's called The Fatal Island. Many tried to find it and all perished." "At the gills of a sea monster," nodded Wabsworth. The Wabbit stared. "How the binky did you know?" Wabsworth grinned. "I saw it in the movies"
at July 31, 2018