8. The Wabbit and the Scunner Akwat 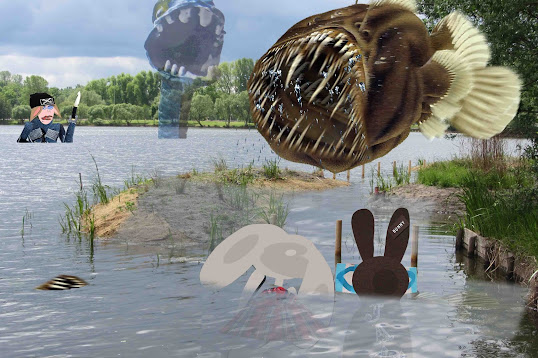 The team followed the fish until they would go no further. Leaving them behind, they waded until the water grew shallow. Nessie crouched flat along the bottom, semi-shrouded in imported mist. Lapinette punted along quietly. The Wabbit complained silently about his fur and the damp. Jenny brought up the rear, pirate boots glooping from the mud. "This be a creepy place, Commander." The Wabbit nodded and checked his fur. Water lapped at the shore and the reeds bent lazily back and forward. Lapinette shivered. They were armed and ready but it took them by surprise. The water spat a giant fish in the air and it was all teeth. It lunged forward with enormous speed and its teeth made a tattoo rattle. It looked back and forth, then it fixed the Wabbit with a steady stare. It dropped its lower jaw and made a clangy rattling like a teaspoon in a tin. There was a pause and the rattling stopped as it turned its gaze to Lapinette. Its lower jaw dropped and it made the same soft sound again. Again there was a silent pause but it broke as Jenny's boots made a loud plop in the mud. The fish swung round but Jenny dunked under the surface - and all it could see was Nessie. It gazed for a while, then its jaw dropped and it made the same rattling sound. Nessie dropped his jaw too - and rattled his teeth. The fish let out an incredible roar. Then it swung and aquaplaned along the water, far into the distance.
at July 11, 2018