9. The Wabbit and the Lucky Anchor 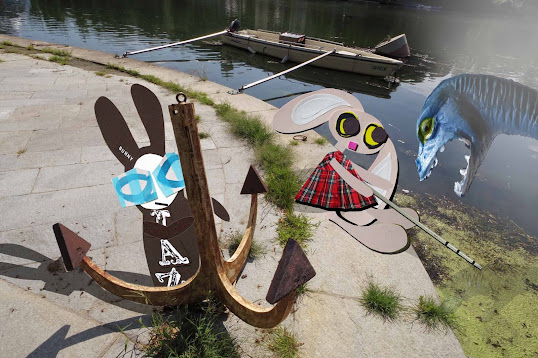 Captain Jenny went in search of a suitable vessel. The Wabbit and Lapinette scavenged for useful items that might help them in pursuit of Akwat, the giant fish. Nessie was content to remain in the river and advise. "Whit's that?" said Nessie. "Some kind of algae," muttered Lapinette. "Never heard of him," said Nessie from a cloud of mist. Lapinette smiled and poked the green substance with a stick. An acrid, rotting smell reached her nose. "Poo bum smell." she spluttered. "Ripe," commented the Wabbit. He put his paws around a giant anchor and tugged. It didn't budge. He placed a foot underneath and levered it. The anchor uttered a rusty groan as it lurched on the Wabbit's other foot. The Wabbit stifled several expletives. "This is a lucky anchor," he announced. Nessie roared with laughter. "Because it landed on a rabbit foot?" The Wabbit merely grinned. "It's lucky because it met me." This met with silence. "It's a big hook, isn't it?" Everyone nodded. "Well, a big hook can snare a big fish." The Wabbit was ebullient and he rocked the anchor dangerously back and forth. Lapinette rose to her feet. "Wabbit, it weighs a ton." The Wabbit looked at Nessie and back to the anchor. His 28 teeth glinted in the sun. Nessie frowned. "Laddie, I'm a plesiosaur, not a traction engine." "Pretend you're in the Highland Games," smiled the Wabbit.
at July 13, 2018