5.The Wabbit - "Return of the Monstroids" 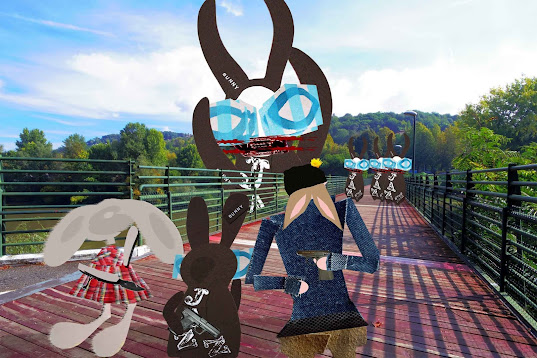 It was Captain Jenny's suggestion to look out from the bridge. It was the Marathon Bridge and its boards creaked with the ghosts of a thousand runners. They set out for the middle but from under the bridge came a monster roar. The Wabbit saw the creature first. "Monstroid!" It towered above them, dribbling blood from its jaws. More Monstroids thumped along the groaning bridge towards them.  Lapinette clutched her edged weapon and shouted. "I'll split you stem to stern!" Jenny yelled at them too." "Get back to Hades!" The Monstroids chortled and nudged each other. The Wabbit had an intimate acquaintance with their kind. One had grown inside him, and when it burst free it spawned an army that terrorised the city. The Monstroid was talking. Only the Wabbit could understand. Lapinette heard him speak a strange language. "Why did you hang the Agent of Rabit?" The Monstroid frowned a grim frown. "Not me." "Who roughed up our captain?" The Monstroid looked back at his cohorts. They shook their heads. The Monstroid shrugged. "You shot at Jenny." yelled the Wabbit. "Not guilty," said the Monstroid. "Then why are you here?" said the Wabbit. "We miss you!" said the Monstroids. The Wabbit made a rude sign with his paw. The Monstroid smiled a hideous smile - then dropped silently into the river. The others seemed to evaporate. Lapinette tugged questioningly at the Wabbit's fur. "They're family," sighed the Wabbit, "I'm obliged to speak to them."
at July 04, 2018