7. Wabsworth and the Hungry Salmon 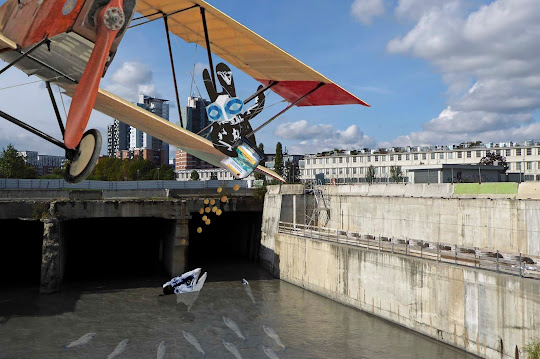 Wabsworth was in receipt of an urgent radio message. It was transmitted only once and was heavily mangled but Wabsworth made the best of it and scrambled Susan the Biplane. The message said feed the fish, at least that's what he thought. It hadn't been hard to spot the fish. There were many, circling round a giant salmon. Wabsworth heard the salmon shouting. "Go round, Susan," he yelled. The salmon reared from the water. "Did you bring the food?" Wabsworth had only found Tropical Pellets, but he stuck a paw up anyway and Susan circled round again. On the second pass Wabsworth poured out food. Water foamed as the fish threshed with delight. "Excellent, yum yum," called the giant salmon. Susan flew back and forward along the surface of the river. Each time she passed, Wabsworth threw more food and the salmon gulped another message. "They've gone to shallower waters! You'll find the culprit there." Wabsworth had no clue about any of this. So they went round again and Wabsworth poured more. "Will you lead us?" he yelled. "We can't go there," yelled the salmon. Susan passed again and Wabsworth shouted an inspired question. "Who are we chasing?" The giant salmon bared his twelve sharp teeth. "We call him the Scunner Akwat." His fins made the river foam around him. Wabsworth threw down the last of the food and held up a paw in salute. Susan dipped her wings, then wheeled and roared south to the shallows.
at July 09, 2018