6. The Wabbit and the Salmon Gang 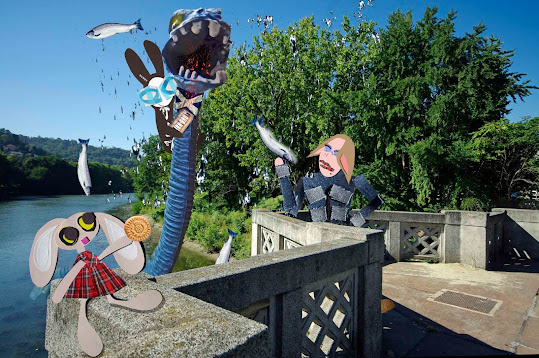 They hunted high and low for the culprits but when they came to Sassi there was another commotion. Nessie exploded from the water with a great wail. "Help me Wabbit," shouted Nessie, "ah canny get rid of thae salmon." The Wabbit mulled over the salmon as the guilty parties, but the idea was too fishy. He could see Nessie was in distress so he pulled a can of Irn Bru from his fur and climbed Nessie's neck. The drink was so shaken that it hissed and fizzed then exploded into Nessie's mouth. "Och," gulped Nessie, "You're a wee brammer. Anything to eat?" Lapinette dug in her frock and produced a couple of shortbread biscuits she'd kept from a party. Nessie head swooped down. The Wabbit clung on as Nessie swept the biscuits into his cavernous mouth. "What's with the fish?" asked Jenny. She batted a leaping salmon back over the bridge. "They followed me here from Loch Ness," complained Nessie. The salmon continued to spiral around them. Lapinette narrowly avoided a head on collision with a salmon, but it slapped her on the face as it passed. "Aaagh, big wet fish," spluttered Lapinette. Suddenly they were gone. "They had their fun," said Nessie, "they'll be away." "Other fish to fry?" grinned the Wabbit. Jenny sniffed the cuff of her uniform and wrinkled her nose. She paused for a second then sniffed again. "It might be worth following them."
at July 06, 2018