5. The Lepus and the Mysterious Island 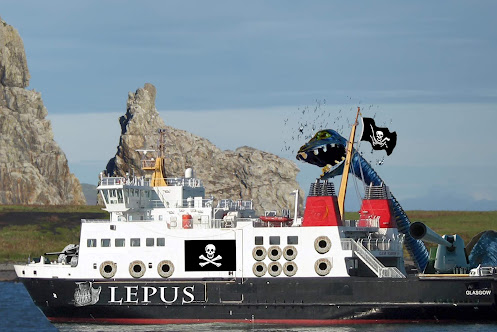 Captain Jenny was first to report the sighting of a likely island. But there was nothing there. Not a seagull, not a gannet, not even a crab. "Curious," thought Jenny. "Hail the island," she shouted. The Lepus let out three klaxon blasts, loud enough to wake the dead. The island remained still as the Lepus circled. Jenny considered a landing party but something made her draw back. "Move away," she ordered. The Lepus moved out a few metres but stopped. Propellers thrashed in an unyielding sea that clutched the Lepus in a grip of steel. Engines died. The breeze stopped and the flag hung limp. The Lepus pitched lazily up and down like a fishing fly. Jenny picked up the radio but it was dead. Only then did she feel a tug from below that dragged the Lepus close to the rocks that surrounded the island. She tried to compensate but it was useless. Then she felt a push in the opposite direction - it was a bit stronger than the pull. Jenny saw water thresh around a large hump, which lay close against the hull. Now a steady force pushed the Lepus sideways out to sea until it was some distance from the island. Only then did Nessie's head break the surface to an ear-splitting cheer from the crew. "Nae problem," said Nessie.
[Nae (Scottish dialect) :  No]
at August 05, 2018