2. The Wabbit and the Gratis Venue 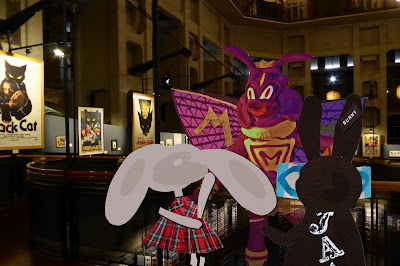 The Wabbit and Lapinette assessed the movie museum as a likely venue for their photo exhibition. They were about to make a final decision, when Moloch peered over the balcony rail. "May I be of assistance?" "We need an exhibition space," smiled Lapinette. "Then look no further," boomed Moloch. "We have all you might require: walls, seats, rest rooms, stairs, lifts - all that sort of thing. And a bar and a restaurant." "What kind of a bar?" asked the Wabbit. "Wild West of course!" replied Moloch. The Wabbit was delighted but he wanted to know how much it would cost. Moloch tut tut tutted. "No cost. I'm on the Board as the ex officio advisor on Sacrifices." "We couldn't possibly impose on your generous nature," giggled Lapinette. Moloch drew himself to his full height (which was considerable) and spoke with authority. "A not-for-profit activity in pursuit of community cohesion, attracts no particular charge." Lapinette raised a paw. "May we sell copies of our original and exciting images?" "In the shop," laughed Moloch. The Wabbit clapped his paws. "Then it's a done deal." "Just one thing," added Moloch. Lapinette and the Wabbit glanced at each other. Moloch's wings rose menacingly. "I'll be signing copies of Cabiria: Moloch's Final Cut." "What could possible go wrong?" chirped the Wabbit.
at February 02, 2018