8. The Wabbit and the Photo House 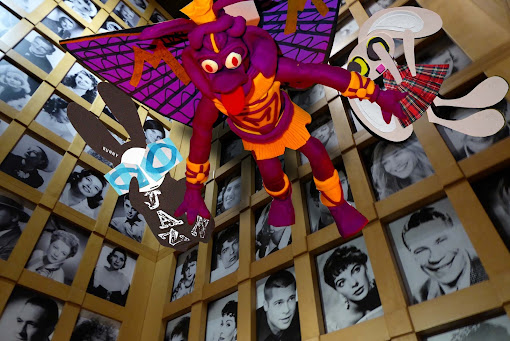 The balcony tilted and the Wabbit and Lapinette slid downwards into a strange space, entirely composed of movie portraits. They thought they would crash to a floor that was indefinite and could hardly be seen. But Moloch was there to help and he spread his strong arms to prevent them plummeting down a wall of photos. "This is the Hall of Glamour," said Moloch. The Wabbit gazed along the portraits. "It's a bit steep," he observed. He clung onto Moloch's arm and gazed down. "What's at the bottom?" asked Lapinette. "The Well of Fame," replied Moloch; "but you really don't want to visit. It's a long way down - and shallower than you think." "I didn't take even one of these photos," said the Wabbit. Moloch cast large eyes up and along. He sighed. "I'm quite upset my own portrait's not here. You know, I used to be famous in the old silent movie days." "I think we'll all be here some day," said Lapinette. "But in the mean time," asked the Wabbit; "how do we get out?" Moloch's eyes twinkled. "We have to ask the stars." Lapinette thought she would try, so she addressed the portraits directly. "What's the way out?" A murmuring commenced and it sounded much like a conversation. Then a single voice spoke. "Just think yourselves out." Lapinette looked at all the pictures. "Who said that?" "Me" confessed the Wabbit.
at February 16, 2018