4. Skratch and the Spare Tickets 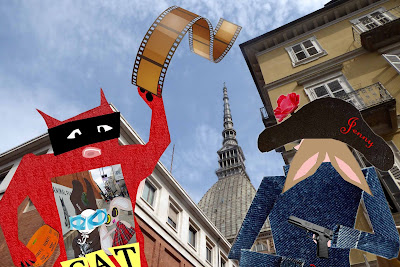 Skratch the Cat flourished a banner and meaowed as loud as a cat might meaow. "Remaining tickets for the Wabbit and Lapinette Photo Expo!" But passersby were few and trade sporadic. He tried screeching. "Nearly sold out, last few here." Nothing. He considered changing his pitch. "Three for the price of two. Fun guaranteed." Jenny rolled into sight. "What's happening, Skratch?" Skratch grinned ear to ear. "I'm driving business along." Jenny viewed the empty street and shook her head. "Let me assist you." She leaned to kiss Skratch and while he was distracted, stole the tickets from his paw. She waved them around threateningly. "Get your tickets now or else!" Tickets sold well. Jenny grew persistent. "Bring your own photographs. Enter the Selfie Surprise!" Soon, all tickets had gone. "Tell me about this selfie thing," said Skratch. "It's Tipsy's idea," replied Jenny; "The public buy the tickets and provide exhibits." "I should have thought of that," moaned Skratch. "Losing your touch?" grinned Jenny. She swayed in a pirate fashion. Her lips pouted. "What's that behind your back?" purred Skratch. "A photograph of a gun," said Jenny in a sultry voice. Skratch gasped in admiration and moved dangerously close. "I have a real one in my jacket," warned Jenny.
at February 07, 2018