1 The Wabbit and the Photo Show 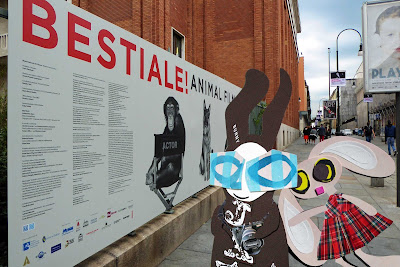 Lapinette caught up with the Wabbit near the film museum. He was critically eyeing the street and toying with camera settings. Lapinette tapped him on the shoulder. "Wabbit, the lens cap is on." The Wabbit took a photograph. "It's fake," he chortled; "The cap is a holographic projection and to all interests and purposes, transparent." He pointed it directly at a passerby. The shutter clicked. The passerby smiled. "You'll get nothing with that cap on, me old bunny." Lapinette watched him go and grinned. "Maybe we should mount a photo show." The Wabbit thought for a moment. "How much should we charge?" "An exorbitant amount," suggested Lapinette; "People will flock." She pointed at the billboard and sighed. "Look at that, I rest my case." "Animals in Films," shrugged the Wabbit; "Always with the good deeds." "Indomitable and courageous and usually dogs," added Lapinette. The Wabbit's camera clicked again. "Not like us," he smiled. "No-one is," nodded Lapinette. The shutter fired again. "We need a theme, a venue, and a time." said Lapinette. "And a bar," added the Wabbit. "Waiters will circulate with delicious tit bits," said Lapinette. "Luminaries will make speeches," murmured the Wabbit. He thought again, long and hard. "Couldn't we just exhibit in the streets?" "Right here in our own town!" laughed Lapinette.
at January 31, 2018