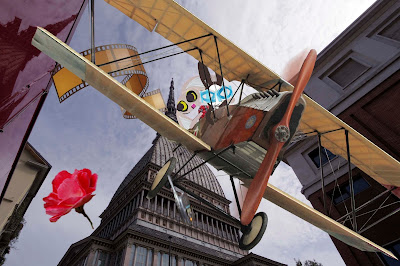 Susan the Biplane extracted the Wabbit and Lapinette from the gallery of the Film Museum and swooped along Via Garibaldi. The Wabbit grinned ear to ear. "Where are we going, Susan?" Susan waggled her wings and her voice crackled over the radio. "I'm transporting Mr and Mrs Wabbit to the Adventure Hotel of course." The Wabbit gulped. Lapinette laughed and gazed down. People looked tiny in the streets, but she waved to them anyway and threw down a flower. With a sudden roar of her engines, Susan tore wildly around the city. She flew like she'd never flown, in an acrobatic display that astonished the Wabbit. She whizzed down Corso Svizzera and across to Lingotto. She skimmed the River Po and buzzed the funicular railway all the way up to Superga. Then she plunged steeply to Piazza Vittorio Veneto. The Wabbit clung to the fuselage with one paw and gripped Lapinette's paw with the other.  "Are you looking for a promotion, Susan?" he gasped. Susan's radio crackled. "This tour is a wedding gift from the Department." The Wabbit shrugged suspiciously. "And ..?" Susan's engine changed note. "And you're wanted back on duty in 24 hours." The Wabbit's 28 teeth flashed momentarily. He smashed his radio on the fuselage and let it slip from his paws. "Take your time," grinned the Wabbit.
at February 26, 2018