5. The Wabbit and the Chance Guests 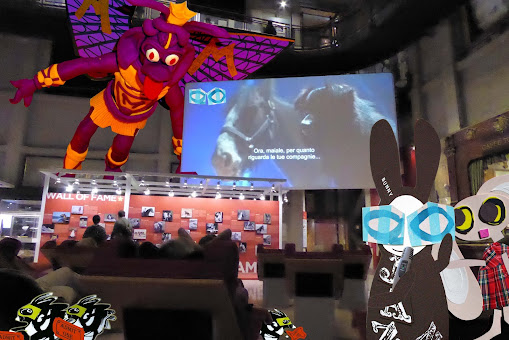 Lapinette was right. The public flocked to the exhibition in vast numbers. Many had their own photos and pinned them to a board. They milled around in an excited fashion, saying ooh and ah from time to time. The Wabbit introduced the show in a hushed tone he'd learned from mainstream television. Moloch loomed above everything, occasionally issuing safety instructions. The Wabbit covered the microphone and whispered to Lapinette. "How much have we taken at the box office?" "Enough to set your Dinosaur Fund to rights," laughed Lapinette. Unusually, the Wabbit's Dinosaur Fund had taken a downward turn - so the Wabbit smiled broadly and announced a raffle. Lapinette pointed to several creatures moving between rows of chairs. "Aren't these creatures Skuttles?" "Yes," agreed the Wabbit. "I''d say they're looking for the bar," murmured Lapinette. "And probably they'll find it," replied the Wabbit. He didn't appear at all phased, but Lapinette looked concerned. "Did you invite them?" "They must have heard about it somehow," shrugged the Wabbit. He moved to intercept the closest Skuttle. "May I see your ticket?" The Skuttle held up a valid ticket and the Wabbit examined it closely. "No problem," he announced. "You'll find complimentary drinks in the bar, downstairs on the right." The Skuttle scuttled off at speed. "At least we know where they are," grinned the Wabbit.
at February 09, 2018