1.The Wabbits on Wedding Vacation 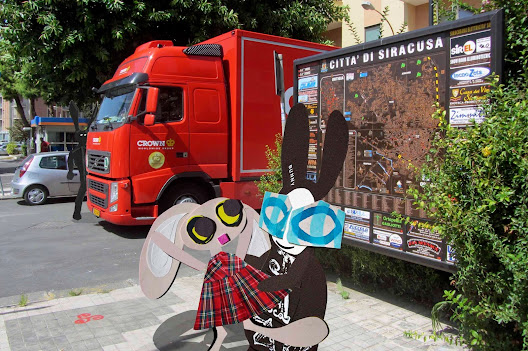 The Wabbit and Lapinette wandered around their honeymoon destination with hardly a care in the world. There was no Department, or paperwork or enemies. It was sunny and quiet - almost idyllic - as Siracusa basked in a late Sicilian heat wave. The Wabbit swept Lapinette in the air and smiled. Lapinette's eyes fluttered. "What about the Adventure Caffè?" "Ah yes," replied the Wabbit; "How the binky are we going to find out what kind of adventure we had?" Lapinette threw up her arms and yelled. "We'll have to do it ourselves - without Skratch." The Wabbit smirked in delight. "Skratch directed it." "He'll certainly know then," said Lapinette. She looked straight at the Wabbit as he gave it deep thought. "I'm not sure," he said; "I'm certain he'd question any form of intentionality." Lapinette pirouetted. "Skratch is not given to auteurism." The Wabbit pirouetted too. "But he gave our adventure a style which played with dynamics of spectacle and emotion." Lapinette knew what she was talking about when it came to spectacle. "Skratch defied convention and placed the reception before the wedding." The Wabbit struck a pose. "That strategy was dark, dangerous and difficult - and involved falling from giant clocks." Lapinette nodded, but she'd noticed something from the corner of her eye. "Did you see an Agent of Rabit?" The Wabbit winked and shrugged and winked again. "Maybe he's on holiday?"
[auteurism : "auteurist criticism located the creative center of a film in the controlling perspective of the director."]