9. The Wabbit and the Subtitled Bed 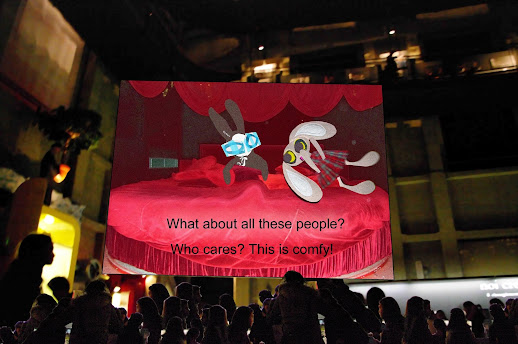 Moloch removed his restraining hands and the Wabbit and Lapinette dropped onto a giant, heart-shaped bed. Lapinette bounced a few times. The Wabbit tucked in and gazed at Lapinette. But cheering ensued so they turned to stare out from a giant movie screen at an adoring audience. Lapinette giggled. "What about all these people?" "This bed feels much too comfy to bother about them," whispered the Wabbit. Applause broke out. "Can they hear us?" asked Lapinette. The audience laughed and whistled and cheered. "We seem to have sub titles," murmured the Wabbit. His words flashed up on the screen as sub titles. The audience repeated them loudly. Clapping spread around the venue. "Maybe they'll go away!" sighed Lapinette. This met with laughter - the Wabbit and Lapinette could do no wrong and their ecstatic audience repeated and cheered every word they uttered. "Wonderful," shouted a critic. "Groundbreaking!" yelled another. The Wabbit decided to go along with things and faced the audience directly. "Technically speaking, we're both supposed to keep one foot on the floor." The audience laughed for some time. Lapinette made a mock scowl. "Wabbit! That stopped in 1965." The crowd screeched and howled and stamped their feet as if they'd never heard a joke before. The Wabbit fumbled around at the back of the bed and found a switch. The screen suddenly grew dark. "Roll credits," murmured the Wabbit.
at February 19, 2018