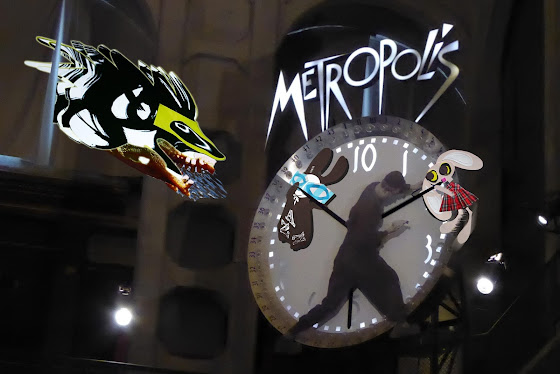 The Wabbit's installation was his own idea. This was quite a surprise because he disapproved of such things. But it seemed like a good intervention to both liven up the photo exhibition and make a point. The Wabbit's plan had interested Lapinette. "It will send a message about power, time and the oppression of the working rabbit." She suggested they dive from the roof and hang on opposite clock hands. Both would appear to pull in opposite directions, representing the plight of the working collective and the ambiguous nature of time itself. The dive was relatively easy but the grab was difficult. Wabbit hung perilously from the minute hand. "So far so good," he gasped. Lapinette dangled from the hour hand and swung back and forth. But with a clang it suddenly lurched down by an hour. "It's fixed. It's not supposed to do that," snorted the Wabbit. There was a bang. Now the minute hand dropped by ten minutes, taking the Wabbit with it. He scrabbled and grunted and scowled - but he hung on. From below, the crowd cheered massively at what they thought was daring display. Another cheer from the ground alerted Lapinette. They both turned. It was a mammoth flying Skuttle, like none they'd ever seen. Blue spray shot from monster jaws. Jagged teeth gnashed. Fins thrashed. "I haven't got time for this," snapped the Wabbit.
at February 12, 2018