10. Wabbit, Lapinette and a Wedding 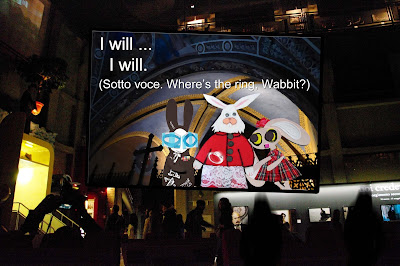 The scene faded in and the crowd gaped. There was applause for the Wabbit and Lapinette but a thunderous roar for ex Cardinal Lapin, whose face now beamed down from every restaurant counter in Turin. Lapin's voice echoed through the vast hall of the Film Museum. "We are gathered together to unite these two rabbits in marriage." A hush fell. "Some say not before time," added Lapin. The glint in his eye lit up the whole space. Waves of polite laughter rippled through the audience but then a silence fell as Lapin whispered inaudibly, "Where's the ring, Wabbit!" This flashed on the screen as sub titles. The collective intake of breath prompted some to quietly shed a tear. "I have it in my fur," said the Wabbit. The audience cringed as he searched frantically, producing several items, none of them matching a ring. Lapinette smiled. "It's stuck to your paw, Wabbit." The audience cheered. "Throw me the ring," suggested Lapinette. Her head nodded and her ears trembled. The audience gulped as the Wabbit measured the distance and flicked the ring in the air. It sparkled and span and looped twice before it headed straight for Lapinette's left paw, where it stuck like glue. Lapin smiled blessings. "You may kiss the bride." But the Wabbit had already begun.
at February 21, 2018