7. The Wabbit and a Plunge from Time 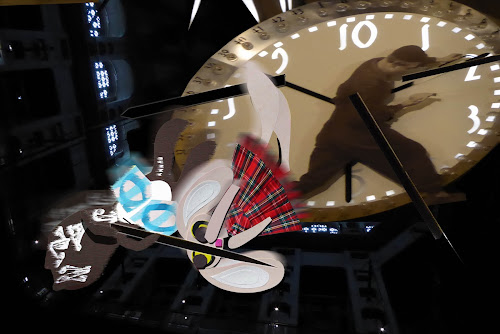 The Skuttle moved too close to the clock and nudged it. It creaked ominously. Lapinette looked at the Wabbit and the Wabbit looked back with gritted teeth. Something snapped and things started to fall apart. Clock hands fell like giant spears. The crowd looked up in horror as Lapinette tumbled from the clock face. With a crack like rotten wood, the Wabbit's second hand broke away. He twisted and grabbed it firmly. Then with a thrust he slowed Lapinette's wild descent, but together with the hand, they continued to fall. The crowd oohed and aahed. The Wabbit angled the clock hand near to vertical and when it hit the ground he twisted with all his might. They vaulted back up, to a massive cheer. Lapinette grabbed a balcony and scrambled on, but the Wabbit disappeared below her. Moments later he was back. Applause broke out. "I'm getting to like this," he grinned. He was on his way down again - but Lapinette grabbed him just before he plunged and swung him safely onto the balcony. A cheer from the crowd was quickly followed by a fearful gasp. Visitors scattered as the giant hand crashed down and stuck quivering in the ground. The crowd roared and roared for more. So the Wabbit waved limply and made an impromptu speech about the fragility of time. Lapinette waved too and turned to the Wabbit with a sigh of relief. "What shall we do for our next trick?" gasped the Wabbit.
at February 14, 2018