2. The Wabbit at the Adventure Hotel 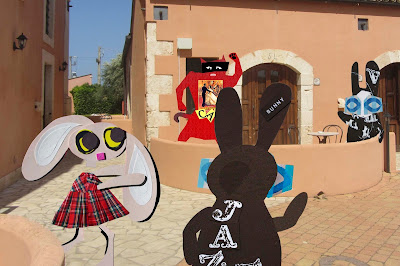 The Adventure Hotel had been difficult to find. But after a bone shaking drive along a narrow track behind the hippodrome, there it was. "Commander, welcome!" meaowed Skratch the Cat. "Your private quarters await," smiled Wabsworth. He waved to indicate the building.  Lapinette indicated her approval. The Wabbit's eyes sparkled. "Not too far from the bar, I hope?" "Aperitivi on the way," purred Skratch. "Drinks are free if it rains," said Wabsworth. The Wabbit looked up at an unyielding blue sky, looked down and spread his paws. "How is this Adventure progressing?" he asked. "This is not an adventure, you're on special vacation, Commander," said Wabsworth. "Rest and relaxation," meaowed Skratch. "Refreshment and recuperation," continued Wabsworth. "Not to mention Rock and Roll," winked Skratch. The Wabbit glanced at Lapinette. "I get the drift." "So we'll leave you alone now," said Wabsworth. "We're in the main building if you need us," added Skratch. The Wabbit frowned and so did Lapinette. "You're both staying?" "Protection," meaowed Skratch. He hissed and crouched, then waved his paws up and down. "Protection who from?" asked Lapinette. "Enemies," growled Wabsworth. "I'd be quite lost without them," sighed the Wabbit.
at March 02, 2018