13. Terni the Dragon and the Big Wind 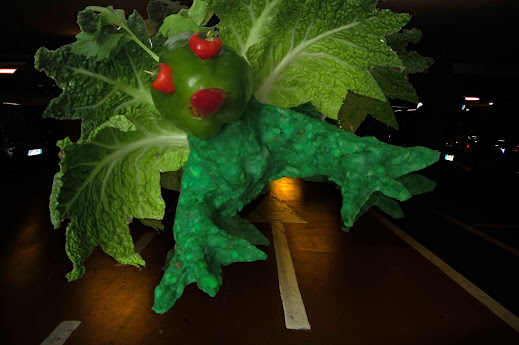 Terni tore through the night with a message. He'd been sent to scout around but was interrupted by the weather. It was no ordinary weather and he was no ordinary dragon. With some justification, Terni considered himself a cut above most of his cohorts. The Wabbit had helped him relocate and recruited him to his team. Now he was officially a superdragon and took his responsibilities seriously. The following wind tore at his cabbage wings and pushed him forward at an incredible speed. "I have to get ahead of this wind," thought Terni. "I have to warn the Wabbit." Terni thought of food and his tummy rumbled. The resulting flatulent blast gave him an advantage and he gained ground. He kept low and skimmed across asphalt that had the colour of camels. Terni knew better than to look back because the wind was more than a wind. it was a swirling, jagged typhoon with teeth like a dinosaur. It seemed to be looking for something and for now it couldn't be bothered to destroy much. But it shrieked like a thousand banshees and swept cars into neat piles of junk. Terni saw Incontinentia looming, He wondered if maybe he should do something less dangerous - like taking Tipsy for a spin. He chortled quietly to himself. Peppery fire erupted into the bleak night air and lit the road ahead. "Hit it!" breathed Terni.
at January 02, 2018