14. The Wabbit and the Wolf Storm 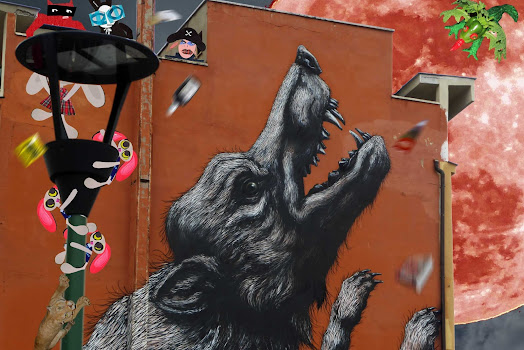 Terni the Dragon arrived just before the storm hit the city of Incontinentia. He flew from the corner of a blood red moon to see the team scrambling to the top of a tall block, He was just in time. Wind buffeted the building and it lurched alarmingly. Fitzy Mitzy and Tipsy clung to a street light. Puma shinned up the post behind them but he could barely get a hold. Skratch pulled Lapinette to the roof. The building swayed. The street light shook. Guttering and pipes fell to the street below. The wolf was only paint on mortar but it started to howl. Long mournful shrieks split the air. The moon dropped lower and lower until it seemed to touch the ground. "I'm coming!" roared Terni. He circled then hovered on a cloud of dragon breath. Skratch pulled everyone up and they huddled on the roof as debris whirled around them. "We could use a lift," shouted the Wabbit. Terni dropped lower and lower but the hurricane force swept him back and forth. The wolf howled louder and louder as the building started to crumble. "Better make it now!" shouted the Wabbit. Terni spat fire into the wind and, for an instant, carved a quiet space. One by one they jumped on his back and held onto his scales like grim death. "Where to?" breathed Terni. "High as you can go," yelled the Wabbit. Terni's wings tried to grip the turbulent air and he stuttered like a helicopter. It was touch and go. But the wind lost its grip for a moment and he shot skywards. The wolf's howls gradually became quieter. Far below them, the building and the city collapsed into a pile of dust. "Tidy that," muttered Lapinette.
at January 04, 2018