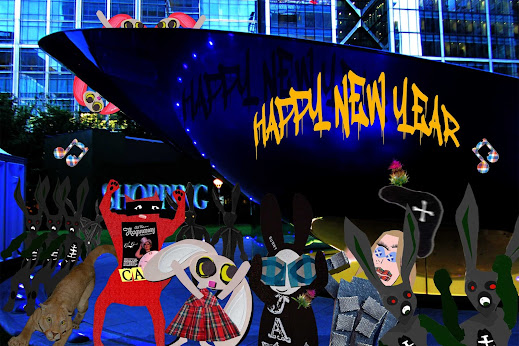 Skratch and Puma escorted the captured Agent to the specified location and then they laughed and laughed! There was food and drink. Agents danced and sang along to wild music. Jenny threw her pirate hat in the air and hooched like a Shetland fiddler. Bells rang out over the stricken city. The captured Agent threw his paws in the air and binkied. The Wabbit began to sing. "A guid New Year to ane and a' an' money may ye see." Lapinette joined in. "An' during a' the years tae come, O happy may ye be." Lapinette's personal guard were already the worse for wear and Tipsy called down. "For the shake of auld lang slime!" Dancing became wilder. "Do you think the truce will hold?" asked Lapinette. "Until the morrow's morn," said the Wabbit. "How can you be certain?" The Wabbit cried with glee. "They'll have bigger hangovers than they have in the Alps." "I'll pass out the aspirins," said Lapinette. "Have you got any now?" asked Jenny. Lapinette pulled a first aid kit from under her frock. The Wabbit passed Jenny a ham and cheese sandwich but not before taking a bite. "How did you find this place?" meaowed Skratch. "Twitter," replied the Wabbit. He executed a pas de basque and downed a malt whisky. "Preventative medicine?" asked Lapinette. "Hooch skirl," yelled the Wabbit.
[A Guid New Year. Sung at Hogmanay (trad Scotland)]
at December 31, 2017