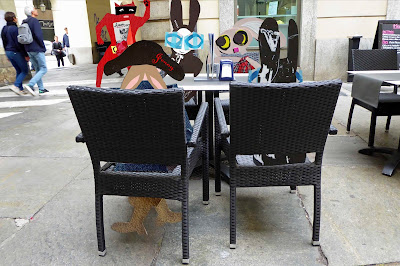 It was chilly, but they chose to sit outside anyway. Lapinette scanned the list. "What's it to be?" asked the Wabbit. Lapinette wrinkled her nose. "It's all newfangled stuff." "I'll have a Prosecco Pouncer," said the Wabbit. Jenny leaned across the table and scowled. "Make mine a Rum Rockeroony." Wabsworth ran his cocktail sub routine. "Beer Runner," he announced. As Lapinette called the waiter, Skratch the Cat ambled around the corner yelling the usual question. "What would you call that for a sort of adventure?" Wabsworth smiled. "It was a form of mythological gesturing where everything indicated everything else." Skratch whisked a spare chair into position. "Like the X Files?" Lapinette raised a paw. "The inexplicable is explained through further inexplicabilities." "Nothing is knowable," laughed Skratch. There was a pause. "So how would we know that?" laughed Wabsworth. "Touché," meowed Skratch. They chortled, but Lapinette was anxious to ask a question about the adventure. "Tibbar said he was neither alive nor dead." Wabsworth leaned gently forward. "That suggests that he has the capacity to be alive or dead." The Wabbit had an idea. "Then maybe Tibbar is in a third state, in a liminality of perpetual waiting." "Where's our drinks?" sighed Lapinette.
[Wabsworth may be referring to  Lucretius, Nothing Is Knowable, and More (De Rerum Natura, 4.469-477)]
at January 29, 2018