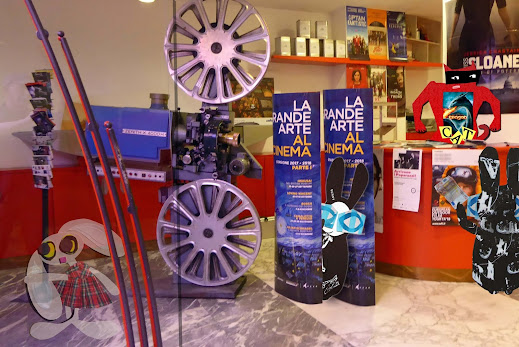 They'd arranged to meet at the cinema caffè and then watch a movie. But the Wabbit and Lapinette wanted to surprise Wabsworth, so they lay in wait. "I think that must be him now," said Lapinette. "I can just see him crossing the road." "Leave it until he's right at the door," said the Wabbit. The cinema had many volunteers and it was Skratch's night to staff the ticket office. He was checking the till when he heard Wabsworth's voice. "What kind of Adventure did you have, while I was here holding the fort?" Skratch looked up in surprise. "How on earth did you get in?" he asked sharply "The cleaners let me in the back," said Wabsworth. He proffered a large note. "May I have four tickets please? I get the android's discount." Skratch agreed and turned to watch the Wabbit. Both Lapinette and the Wabbit were clearly oblivious to Wabsworth's arrival. He shrugged and uttered: "The adventure was as sprawling and chaotic as an adventure can be." Wabsworth took the tickets and pushed them into his coat. "Anti-narrativity is but an illusion," he said. "Textuality sutures the rift between anti-narrativity and reality." Skratch pondered this for while. "Where did you read that?" he purred. Wabsworth smiled. "I didn't read it. The cleaners told me."
[Wabsworth is possibly referring to a famous documentary, Night Cleaners made in 1975 (UK)]
at January 08, 2018