1.The Wabbit: The Carrot Club Murder 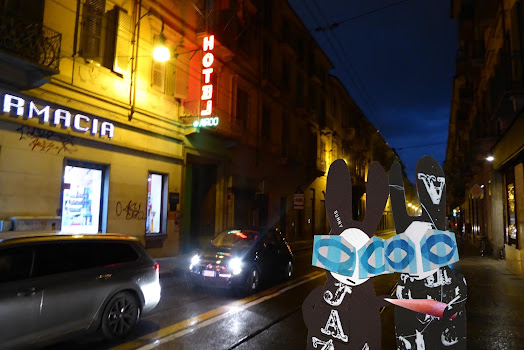 The Wabbit met Wabsworth outside a budget hotel in downtown Turin on a matter of urgency. "It's about the Carrot Club," said Wabsworth. The Wabbit was puzzled because Carrot Club matters were seldom urgent. "There's been a murder," said Wabsworth. "Who's the victim?" asked the Wabbit. Wabsworth sighed. "It seems to be me." "But you're here," said the Wabbit. He poked him sharply in the ribs to make sure. "It looks like me," said Wabsworth, "but it's not me." The Wabbit shook his head from side to side. "We'd better get down there, pronto." Now Wabsworth shook his head. "It's crawling with forensic rabbits from the Bureau of Internal Mysteries." He fished in his fur and extracted a fearsome sharpened carrot. The Wabbit touched the end. "Yow," he shouted. He sucked his paw and gasped. "You took a murder weapon from a crime scene?" Wabsworth pointed. "It has your gnaw marks on it, Commander. Look just here. And here." The Wabbit grimaced. His gnaw marks were unmistakable. "I have to ask you, Wabbit. Where were you between the hours of dusk and dawn?" The Wabbit laughed. "I was with you of course." Wabsworth frowned and the Wabbit smiled. "OK, I owe you lunch. Tell me, is it messy?" Wabsworth tucked the weapon in his fur. "Who would have thought an android had so much blood..."
at January 10, 2018