4. The Wabbit and the Sudden Snatch. 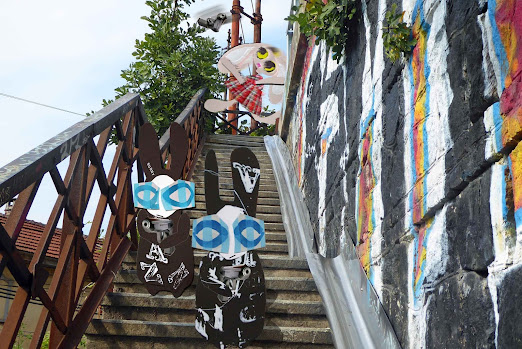 A series of abductions were reported just where the railway line disappeared under Corso Francia. They responded quickly and scouted all around. It was a lonely spot, frequented by riff-raff and ne'er do wells - so they were on their guard. "There's something on the rails," shouted Lapinette. She peered over the fence. "It looks like a question mark." "Let's go down and have a look," said the Wabbit, waving an automatic from left to right. His gun was far from new. The safety catch had broken off a long time since, and the trigger was shiny and worn. "Steady there, Commander, that gat needs a reset," said Wabsworth. Lapinette turned to shout. "Wabbit, I think it moved into the ..." Her voice cut off suddenly. The Wabbit's head swiveled to look, but no-one was there. Lapinette had gone. They rushed to the top of the steps - but of Lapinette, there was no trace whatsoever, except for her automatic. The Wabbit picked it up, wheeled and fired three times at the rail tracks. Wabsworth's ears swayed slightly. "Commander?" "She'll hear it," shrugged the Wabbit. He poked around and kicked grass-eaten asphalt. "I'm looking for her knife," he explained. They stiffened as a bloodcurdling cry echoed from the street, followed by three more. "She still has it," smiled the Wabbit.
[gat: slang for gun. Originally derived from Gatling Gun but eventually applied to hand guns.]
at January 17, 2018