2. The Wabbit and the Scene of Crime 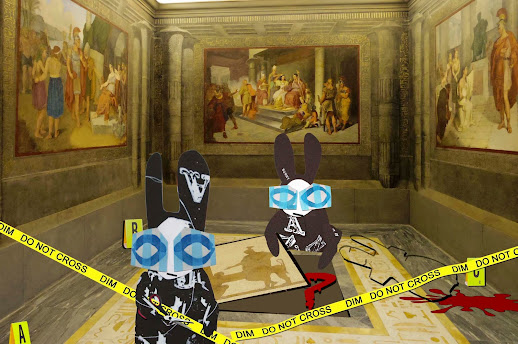 The scene of crime was deserted except from some flimsy yellow tape, the shape of a body and dried blood. The Wabbit hopped under the tape. Wabsworth sliced it neatly and carefully initialled the cut edge. "They usually miss something," shrugged the Wabbit. He looked at the shape and whistled "I ain't got nobody," through his 28 teeth. Then he crouched to examine an ornate floor tile. "This is loose," he murmured. He levered it up. It groaned as he slid it to the side. "Oh, what is that? What is the question, Wabsworth?" "Who's been and gone and dunnit to who?" replied Wabsworth. "The perpetrator dunnit," said the Wabbit. "That's a tautology," answered Wabsworth. The Wabbit nodded his head twice -  up and down and side to side. Then he spoke: "Someone drew a question mark with the blood of the victim." "A signature?" suggested Wabsworth. The Wabbit shrugged again. "We don't know if the perp drew it." Wabsworth smiled. "OK Sherlock, who then?" "The evidence currently points to me." smiled the Wabbit. "Well it doesn't look like your signature," scowled Wabsworth. The Wabbit grinned. "Then I'm off the hook." He slid the tile back in place. "I don't think it happened here," he said. "This is just the disposal site." Wabsworth's circuits whirred, then he said: "To both implicate you and leave an indelible stain on the Carrot Club's reputation." "What reputation?" asked the Wabbit.
at January 12, 2018