7. Wabsworth and the Known Foe 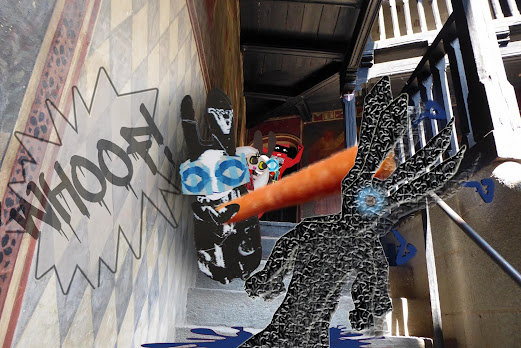 Wabsworth picked up the creature and pushed it to the edge of the stairs. It teetered for a second and said one word. Wabsworth hit it with the carrot. It pitched down the steps and lay crumpled in the stairwell. It shimmered and became liquid but just as quickly became solid again. It tried again without success. With a gasp, it pushed its back to the wall. It coughed. Wabsworth raised his cudgel again. "Please, No more carrots," groaned the creature. The Wabbit hopped to the bottom of the stairs and prodded the creature with a foot. "Tibbar, I thought you were dead." Tibbar groaned. "I don't think of myself as dead or alive." The Wabbit laughed, "Then I won't put out a wanted poster for you." Tibbar hissed and his eye flashed. Wabsworth shouldered his carrot and hopped down to the join the Wabbit. "I don't know this Tibbar." The Wabbit kept a careful eye on Tibbar because he knew him to be both powerful and cunning. "He's a freelance pest." Tibbar tied to shift shape but he was too weak. The Wabbit pushed him against the wall. "The body in the Carrot Club?" "That was me," said Tibbar. "And the hanging agent at the Department?" asked Wabsworth. He raised his carrot and shook it. "Me," nodded Tibbar quickly. Lapinette called from upstairs. "What about my abduction?" "Sorry," moaned Tibbar. "You'll be so sorrier," yelled Lapinette.
[Tibbar's first appearance was in an adventure called Camera Converto.  Tibbar ("rabbit" backwards) is here.]
at January 24, 2018