3. The Wabbit and the Hanging Agent 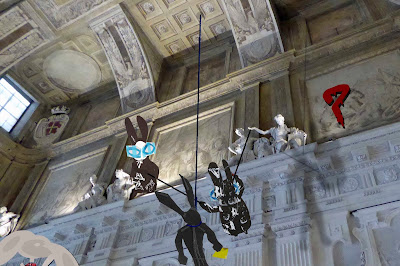 Lapinette called urgently from the Department of Wabbit Affairs to summon the Wabbit to an incident. There, an Agent swung gently from a rope tied high on the roof, and he looked dead or close to it. "Better get him down," grimaced the Wabbit. He pulled mountaineering equipment from his fur and scaled the wall. Wabsworth took the service stairs and appeared from a skylight. "Easy now," shouted Lapinette, "All in one piece, please."  The Wabbit took a good look. "He has a note." Wabsworth swung across and grabbed it. The body swayed once more and suddenly crashed to the ground. Lapinette hopped out of the way with an angry cry. "Is he dead?" called the Wabbit. "Well he is now," scowled Lapinette. "It was the note that did it!" yelled the Wabbit. Lapinette glared. "What does the note say?" Her nose wrinkled as she gazed at the crumpled corpse. Wabsworth squinted at the scrawled message. "It says you're next." "Who's next?" asked the Wabbit. "The note writer failed to elucidate," replied Wabsworth. "Look there's a question mark, painted in blood," pointed Lapinette, "It's on a picture." Wabsworth conducted a speedy analysis. "It's not blood, it's colouring," "That's a priceless work of art," yelled Lapinette. Wabsworth moistened a paw, dabbed the question mark, and tasted it. "Food dye," he murmured.  "Too much dyeing round here," hissed the Wabbit.
at January 15, 2018