10. The Wabbit and the Dark Side 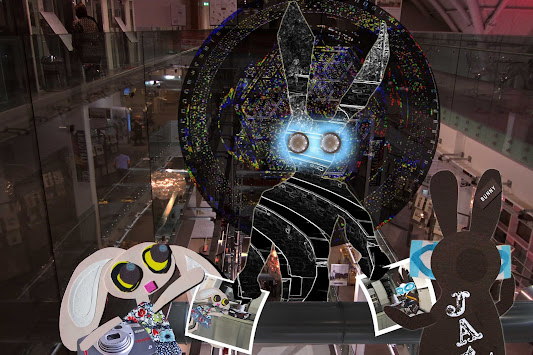 Lapinette pressed the shutter. The camera flashed and the scene changed. A ghostly rabbit floated over an equally ghostly restaurant. Around his head was a dark halo and his piercing eyes were a sapphire blue. "These are for you," said the rabbit. His outstretched paws held two prints and both depicted Lapinette and the Wabbit assaulting the camera. The Wabbit took his print and scrutinised it. Then he looked up at the rabbit and spoke. "You are Tibbar." His voice was quiet. Nonetheless, it echoed sharply from the vaulted roof. The dark rabbit nodded. "We have a common interest, Wabbit." But the Wabbit shook his head. "No. I have no interest in modifying the wicked. That's something they have to do for themselves." Tibbar's eyes flashed. "I returned your friend, Skratch." "It was a spiteful joke to take him," retorted Lapinette. Now Tibbar laughed. "You used violence to get him back." His smile was a sneer. "So you are just the same as me." The Wabbit stood his ground. "Hardly," he said. "You look a little dead to me." He tore up his print and scattered the fragments over the balcony. Lapinette followed suit. Tibbar raged in pain. He gathered the remaining fragments and clutched them to his chest. He howled long and hard. Then Tibbar and the fragments and the camera vanished as if they had never been. Lapinette stared at the Wabbit. "How did you know? I've never heard of Tibbar." "It was a lucky guess," said the Wabbit.
[Tibbar: Anonym of rabbit. The letters are reversed.]
at February 24, 2016