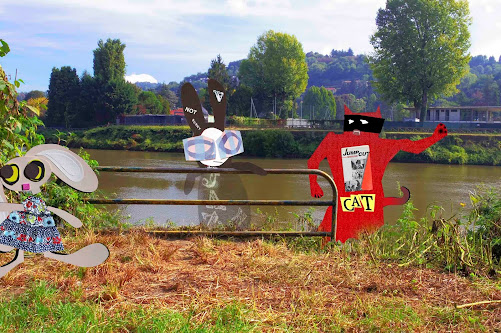 The Wabbit leaned on a fence and waited for the motor ferry that plied the river. His staycation was working. Just waiting in solitary silence placed the Wabbit in a state of near bliss. Even when he caught sight of Lapinette, she dutifully ignored him and he watched her skip along the riverside. The Wabbit breathed deeply and relaxed as people came and people went. But he heard something disturb the water and thought it might be a crane. So he turned and, to his annoyance, saw it was Skratch emerging from an early swim. The Wabbit fumbled in his fur and swiped his wearable technology app. The Wabbit's head reddened and his lettering changed. He wondered if it was enough and he swiped again. His head became rather hot. "Don't I know you?" asked Skratch, shaking water from his fur. "You look a bit like my friend, the Wabbit." The bottom half of the Wabbit's body rapidly became semi transparent but the Wabbit chose to ignore it. Instead, he spoke in a husky voice. "I am one long lost distant cousin of the Wabbit. I am coming from Wabbitland." Skratch smiled. "Pleased to meet you. I'm going to a film festival about lost boys flying kites. I can get you in free." "Uh, uh" said the Wabbit and shook his head. "I want to be alone." Skratch looked down. "Very alone. You seem to be disappearing." The Wabbit fanned his face and puffed. "It is just a trick of the light."
at April 01, 2016