10. The Wabbit and the Object Hotel 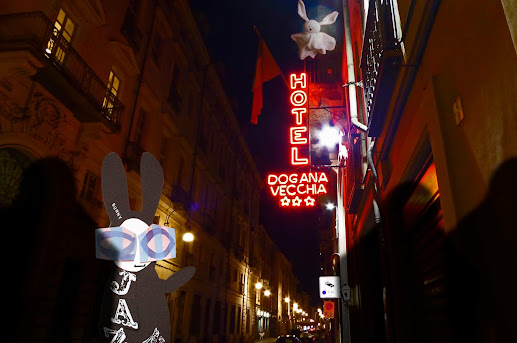 The Wabbit hopped forcefully from the Metro with the shadows following close behind. It only took a swipe of his wearable technology application to give him an idea and his paws were guided to a suitable location. There he found Ghost Bunny hovering over a hotel sign that cast a red neon glow around the hallowed entrance below. The Wabbit stopped and waved his paw like a tour guide. "I've known this place for many years," he announced. His shadow charges made an eerie sound so the Wabbit continued. "Often, I saw guests emerge who had no shadow and who seemed in desperate need of one." The shadows wailed painfully in desire and the Wabbit waved his paw in a kind of blessing. "So here are your objects and your salvation." The shadows wailed once more. "Perhaps they won't want us as their shadows." The Wabbit shook his head. "Don't ask. Merely attach yourselves. In all likelihood they won't know at first." The shadows murmured, "What then?" "Ah," smiled the Wabbit, "then you're stuck with each other and you have to work out an accommodation between you." "Can't we be your shadow?" pleaded the leading shadow. Now the Wabbit laughed. "I already have my own shadow and one is quite enough." A blood curdling shriek from Ghost Bunny alerted the Wabbit to approaching guests. "Now," said the Wabbit, "let's see which objects have no shadow ..."
[The Hotel Dogana Vecchia is a well appointed hotel in Turin. Located in the historical district, it is possibly the oldest in the city.]
at April 18, 2016