6. The Wabbit and Dinosaur Funding 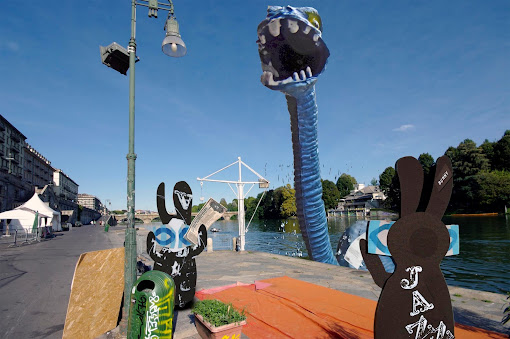 The Wabbit disembarked and hopped the quay. Wabsworth hurried towards him. "Sorry to disturb you during your Staycation, Commander!" "All part of the holiday," said the Wabbit brightly. Wabsworth waved an impressive looking bond. "It's your Dinosaur Fund." Wabsworth was breathing heavily for an android and he looked anxious. But nothing could phase the Wabbit on his staycation - not even a curious threshing from the river. He shrugged and waited for an explanation. "Funds passed through Panama and became incredibly soiled," said Wabsworth, "so we routed them for deep cleaning." The Wabbit was cheered. "Where?" he asked. "Loch Ness, Scotland," replied Wabsworth. A bellow echoed along the quay as a dinosaur reared from the river. The Wabbit smiled nonchalantly because anything can happen on a staycation - and he swiped his app. "Is it Nessie?" "Ciamar a tha thu?" said the dinosaur. The Wabbit felt a warm glow from his fur and nodded. "I'm having fun on my staycation." Nessie roared in an impressive fashion. "We forgot to bill you for ironing. We're proud of our personal touch, so I came directly." Wabsworth waved the bond frantically and Nessie snatched it in her jaws and roared. "That will do nicely." Wabsworth frowned. "I insist on a receipt." A receipt fluttered down and the Wabbit tucked it in his fur and gazed up. "How did you get here, Nessie?" Nessie bellowed. "The official channels!"
[Ciamar a tha thu? : Scottish Gaelic. How are you?]
at April 08, 2016