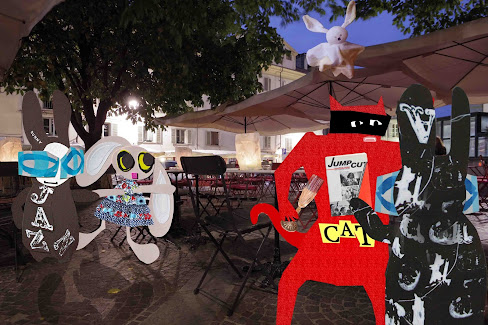 The Wabbit and Lapinette arrived to find Skratch the Cat and Wabsworth in heated debate. "No Wabsworth," said Skratch, "the story within a story is as old as Odysseus himself." Ghost Bunny fluttered across the tables and finding no-one to haunt, eavesdropped. Wabsworth waved a paw in dismissal. "The inside story guides us to the attributes of the characters, because the outside story has no plot." Lapinette nudged the Wabbit and dragged him to a table. "My staycation is over," frowned the Wabbit, "it was never supposed to have a plot." Skratch turned to greet them both. "OK Wabbit, then it's your turn to say what kind of an Adventure that was." The Wabbit grinned a big grin. "Its function was to disclose the background of characters to the audience, somewhat like Odysseus." Ghost Bunny fluttered and wailed. "The Wabbit met ghouls, sea serpents and shadows without bodies." Lapinette chipped in. "And he used tricks," "And culinary explosives," murmured Wabsworth. "All very colourful," smiled Skratch. "I met your long lost distant cousin by the way." The Wabbit had nearly forgotten about trying to stay incognito - and was embarrassed by his deception. Lapinette covered for him. "That was a test of the Wabbit's wearable technology app." "I knew it was you Wabbit," said Skratch, "because you suddenly disappeared." The Wabbit looked furtive. He swiped his app and his ears vanished. "I'm taking that away," said Lapinette.
at April 22, 2016