8. The Wabbit and the Shadow of Pluto 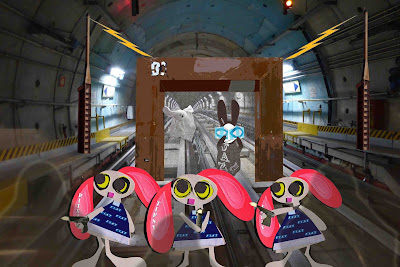 The Wabbit and Ghost Bunny tracked the sounds to the Metro. Ghost Bunny's portal to Pluto had shifted location and things were buzzing. The Wabbit swiped his wearable technology app and pushed his head through the force field. Ghost Bunny did the same, although strictly speaking she didn't have to. On the other side, Lapinette's personal guard was engaged in a firefight and looked under pressure. They fired and fired but shadows advanced with menacing shrieks.  "What kind of Binky is this on my holiday?" muttered the Wabbit. Ghost Bunny swirled hazily through the force field. "The Shadows of Pluto," she whispered, "they're supposed to be in permanent custody." "What for?" mused the Wabbit. "Crimes against light" said Ghost Bunny. The Wabbit growled, "Then they mustn't get through," and he burst through the field. Tipsy fired a steady stream of rounds to minimal effect and yelled, "Commander, you're on staycation, Hop back through the portal immediately!" The Wabbit dusted his fur. "Certainly not." Fitzy signalled to the Wabbit. "Sheeps' shiblets, Commander, that's an order." The Wabbit smiled heartily. "I'm freelancing." The shadows got closer. "Halt," said the Wabbit. The shadows stopped and one of them spoke. "Are you the rabbit that is "Yet to Come?" The Wabbit's 28 teeth looked like a sharp comb. "Consider me arrived."
at April 13, 2016